We spoke with Terry of Morgan Hill, CA recently about her daughter Becca who is an American Heritage Girl and attends a charter school.  Becca brought Rush Revere books to her teacher, who was thrilled to receive them.  Her class later re-enacted the Boston Massacre Mock Trial where they dressed up in colonial costumes. You may remember this trial as the one where future second president John Adams defended the British soldiers, to prove the American legal system was fair. In all, 72 fifth graders participated, while the sixth graders observed.

Terry let us know that Becca, “can’t wait for others to get passionate about accurate and more complete American history with Rush Revere.” Becca is pictured dressed up for the Boston Massacre mock trial with stacks of Rush Revere books. 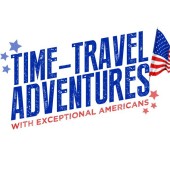 Taking the mystery out of history!